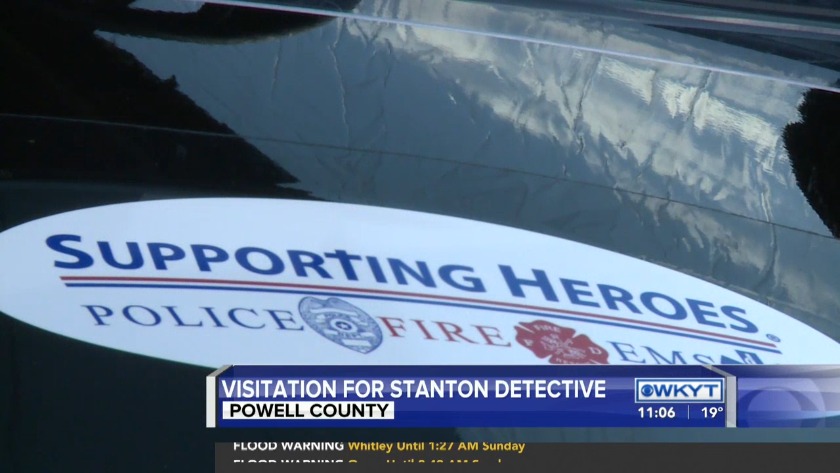 POWELL CO., Ky. (WKYT) - A Powell County community is saying their final goodbyes to a detective who died suddenly.

Photo of Det. Kirk from an interview with WKYT in 2016.

Earlier this week, Stanton Police Detective James Kirk died after he suffered a heart attack inside a courtroom. He was 40 years old.

His visitation was held Friday.

"It truly is like you lost a member of your family because you have," said Lt. Jason Bunch. "Law enforcement is a brotherhood and a sisterhood."

Fellow officers say Kirk was a top notch guy to work with.

"He's a great officer. learned a lot from him, very good to people, very courteous and knew how to hold himself professionally," said Jacob Holland, with the Wolfe County Sheriff's Department.

Officers said now it's their duty to live out Kirk's legacy of respect and putting community first.

Folks are making their way into this church on Stanton to honor the life of Detective James Kirk. He died Tuesday. @WKYT pic.twitter.com/jxnibJdfj7

The community and several police agencies have been coming to pay their respects. Folks are remembering Kirk and comforting his wife and children.

Saturday, Kirk will be honored with full law enforcement honors including a flyover, a flag folding ceremony and taps will be played on the bagpipes.

Before joining the Stanton Police Department in 2018, Kirk was the Clay City police chief.