Dr. Erin Calipari has game plan to try and beat the growing drug problem in Kentucky 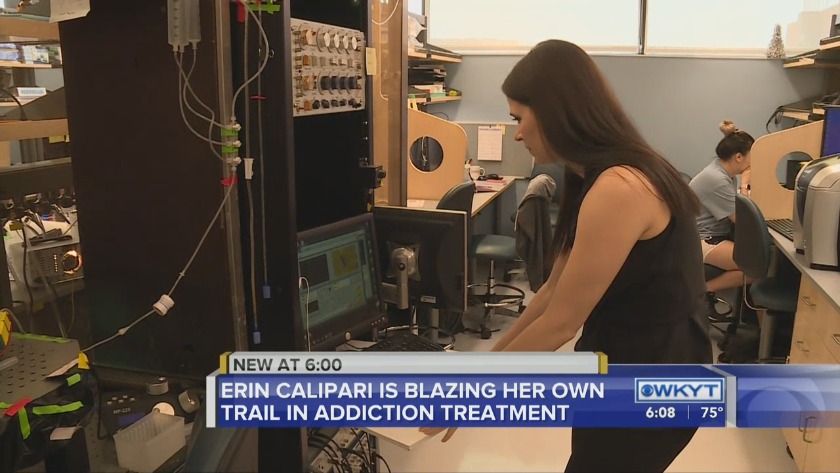 NASHVILLE, Tenn. (WKYT) - Kentucky has one of the highest opioid addiction rates in the country and it isn't slowing down.

Recently WKYT traveled to Nashville and was given the opportunity to sit down with Erin Calipari, Kentucky Wildcats basketball coach John Calipari's oldest daughter.

She may have a famous last name, but she is making her own mark in the world of science and holding her own court at Vanderbilt University Medical Center with her research on drug addiction and the brain.

Erin's father has been in the coaching spotlight for decades. That's why it should come as no surprise she has learned a lot from the game and her dad.

Her sport now isn't basketball, but rather science, where she is the head coach and her court, is a research lab.

"Sports are very similar," Erin Calipari said. "You have a team of people working together to get to a common goal."

Inside the Vanderbilt Center for Addiction Research, you will find Calipari leading her team of scientists and researchers.

The game plan in the lab that bears her name isn't about winning but rather understanding the brain and how it works.

"Our question really is how does experience with drugs or drug exposure change the way that animals use information to guide decision making," said Calipari.

With the opioid crisis at an all-time high, Calipari's research at a very basic level looks to find why people become addicted and looks to underscore it as a disease.

"We want to understand the brain so we can try and improve treatment outcomes and also communicate with the public so they understand where this disorder is coming from and what factors really underlie vulnerability," said Calipari.

The Assistant Professor in the Department of Pharmacology at Vanderbilt didn't start out in drug addiction research at first.

"I actually started out as an endocrinologist. I was really excited about hormonal function and hormonal regulation behavior, and then I ended up in a lab that was doing drug addiction work, and I realized it kind of merged my interest with a major public health problem that was really under-funded and under-studied," said Calipari.

Her focus now is on women and addiction and how hormonal changes can make them more prone to getting hooked on drugs.

"Women transition to addiction faster, they take more drugs, they have more problems with abstinence, and they are more likely to relapse," Calipari said. "So what we are trying to understand is why that happens, what factors make women or females particularly vulnerable to the addictive properties of drugs."

Calipari says science has always clicked for her when other subjects didn't.

Away from the lab, she is quite outspoken in the social media world, especially when it comes to her dad and UK basketball.

She admits having the Calipari name and social media gives her an outlet to expose others to science.

"This gives me a platform to kind of communicate who I am to people, but also communicate to the public in a way that lets me really bring attention to this really important disease in a way that I wouldn't be able to otherwise," said Calipari.

Her last name may be synonymous in Kentucky for basketball, but it’s the name Erin Calipari is making for herself at Vanderbilt with the work she is doing that might be real the game changer when it comes to beating addiction.

Calipari received her undergraduate degree at the University of Massachusetts, her Ph.D. at Wake Forest and did her postdoctoral training at Icahn School of Medicine at Mount Sinai. Calipari did play basketball in college, but she admits she wasn't the star player of her team.