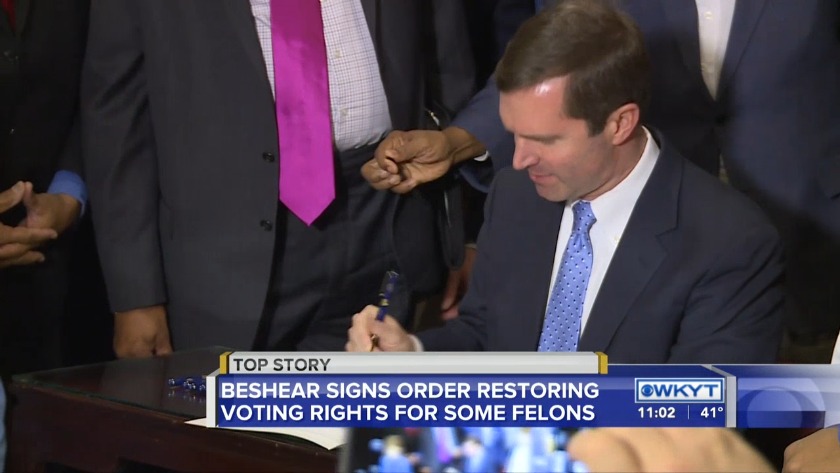 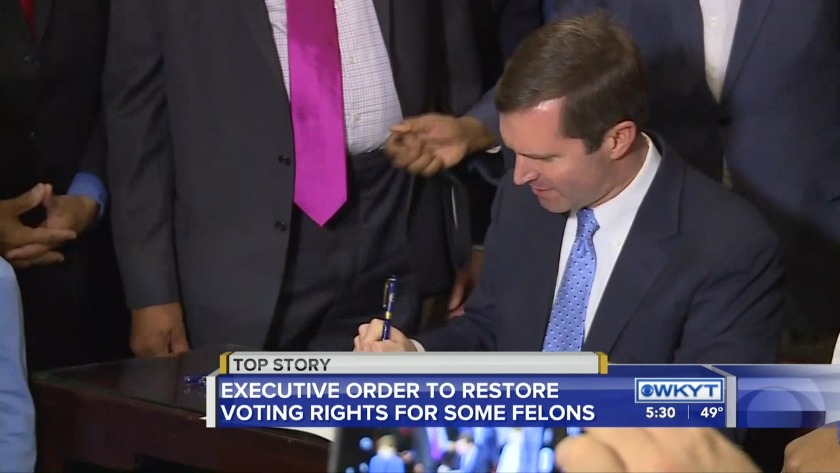 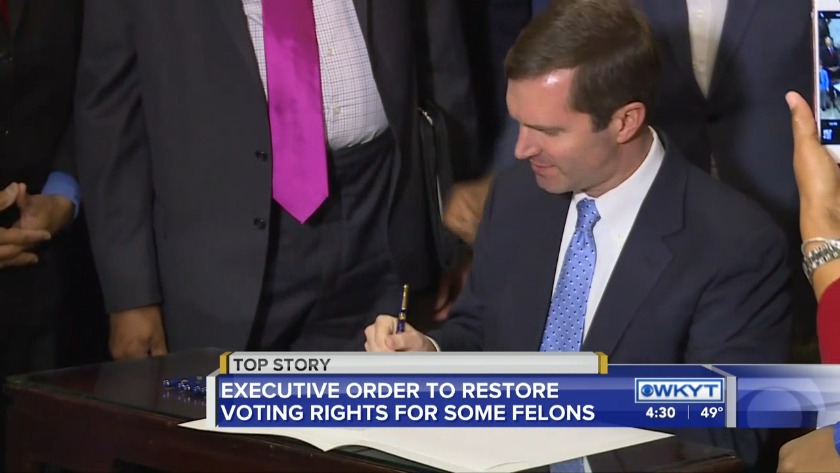 "These are people who once stood inside confining walls looking out and now years after they paid their debts on Election Day they're still forced to stand outside the voting booth looking in. That needs to change," said Gov. Beshear.

Felons who have served time for their crimes fall under the order.

It's part of a promise Beshear made while on the campaign trail.

“My faith teaches me to treat others with dignity and respect. My faith also teaches forgiveness and that is why I am restoring voting rights to over one hundred forty thousand Kentuckians who have done wrong in the past but are doing right now,” said Beshear. “I want to lift up all of our families and I believe we have a moral responsibility to protect and expand the right to vote.”

Voting rights supporters surrounded the governor while he signed the order.

“Every citizen who has paid their debt has earned the right to return to full citizenship. To withhold that is simply wrong,” said Justice Mary Noble, secretary of the Justice and Public Safety Cabinet. “The cabinet embraces the executive order and we look forward to assisting those who qualify with the restoration of their civil rights.”

House Speaker David Osborne, R-Prospect, said he and other lawmakers are reviewing the order.

"Initially, we have concerns about the use of an executive order to effectively amend our state constitution," said Osborne. "Ultimately, only the Kentucky voter has the authority to amend our constitution.”

Gov. Beshear said he's working on a constitutional amendment that would protect his order.

The Kentucky Democratic Party is applauding the move from Gov. Beshear.

"We have had unnecessary voting restrictions for far too long," said KDP Chair Ben Self. "This is a great step in increasing participation in our elections while keeping a promise to show that all Kentuckians matter.”

The order goes into effect immediately.

Before Gov. Beshear’s action, Kentucky was just one of two states in the nation that imposed a lifetime ban on voting for all people with felony convictions.

The specific crimes excluded from the restoration executive order include treason; bribery in an election; and violent offenses, including all rapes and sexual abuses, homicide, fetal homicide, first and second-degree assault and assault under extreme emotional disturbance. A complete list of excluded offenses is provided in the executive order.

The order also does not apply to federal convictions or convictions from other jurisdictions, or to those who have pending criminal charges or arrests. The order is not a full pardon – the conviction will remain.

You can read the full order below.