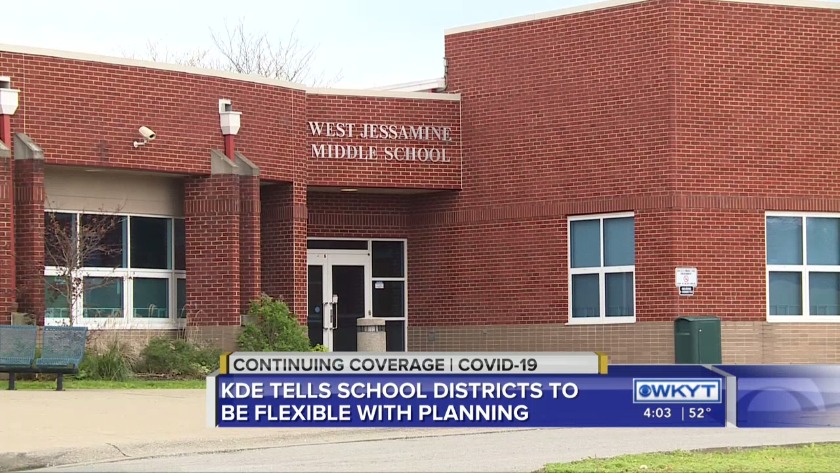 FRANKFORT, Ky. (WKYT) - The Kentucky Department of Education (KDE) is asking school districts to be flexible as they consider plans for the start of the next school year during the COVID-19 emergency.

Interim Education Commissioner Kevin Brown told superintendents that Gov. Andy Beshear and Lt. Governor Jacqueline Coleman want to ensure that KDE and local districts are planning for multiple situations that could occur before and after the start of the 2020-2021 school year.

KDE is asking superintendents to consider starting school at the end of July, in August, or after labor day. Talked to Jessamine Co and Scott Co superintendents about what they think.They’re hoping for in person instruction but say social distancing in schools will be a challenge pic.twitter.com/ddzOKpFHNd

Brown says planning is already underway even though there are many unknowns about what the start of a new school year might look like in Kentucky schools.

“The good news is we have some time to plan; the bad news is we don’t know exactly what we’re planning for,” Brown said. “We need every district to be nimble and to be able to adjust to what could be a changing public health landscape in the fall.”

Brown says Gov. Beshear and Lt. Governor Coleman wants KDE and its districts to consider three possibilities for when the next school year might start:

Brown says an early start could let districts begin the year with in-person instruction if a decline in the number of cases of the coronavirus allows it, with the possibility of a suspension of in-person classes if there is a spike in cases.

Brown told the superintendents they might want to consider asking their local boards of education to approve multiple calendars to allow for the different scenarios. He says districts should be prepared to adapt to changing circumstances near or after the beginning of the school year.

“We don’t know that any of this will occur, but we need in a time of a global pandemic to be prepared,” Brown said.

Brown also says starting in-person classes might come with a number of changes that will have to be made in the interest of the safety and health of students and staff members.

The KDE says those changes could include the use of social distancing both in the school buildings and on buses.

Brown says KDE is working with the Council of Chief State School Officers and the Southern Regional Educational Board as it develops guidance issued by KDE will focus on what is best for Kentucky's students.

Brown says planning will continue in the coming weeks and months. He says the planning will involve districts and partner groups, but the decisions will ultimately be made at the local level.

“We’re not going to dictate from the department what your calendar looks like,” he said. “We’re just telling you about things you’re going to have to be prepared for if the public health landscape changes.”

He says the discussion will continue in greater detail in the next superintendents' webcast May 12.

KDE says the superintendents were told that Kentucky received approval for the largest portion of the money the state will receive for elementary and secondary education from the federal Coronavirus Aid, Relief and Economic Security (CARES) Act.

KDE says Kentucky will receive $193.2 million from the Elementary and Secondary School Emergency Relief Fund. The fund is intended to provide local education agencies with emergency funds to address the impact of COVID-19 on elementary and secondary schools.