Many Kentuckians still having trouble filing for unemployment, receiving payments 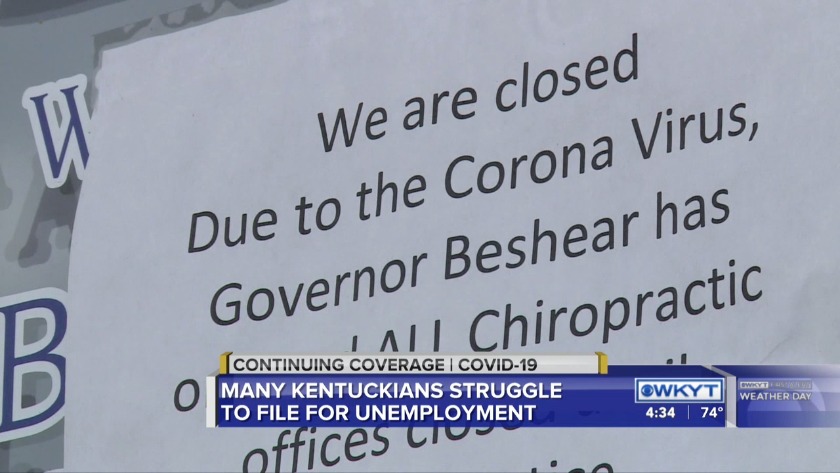 WATCH Many Kentuckians still having trouble filing for unemployment

WATCH Many still having trouble filing for unemployment, receiving payments

FRANKFORT, Ky. (WKYT) - Kentuckians are still having trouble applying for or receiving their unemployment, weeks after they applied.

Many of you say you were finally able to get through, but now you either haven't received payment or you have been told the claim was under investigation.

Josh Benton with the state's Education and Workforce Development Cabinet is expected to speak at Tuesday's 5 p.m. news conference and many Kentuckians are hoping he's going to have some good news for them.

Thousands of people have applied and some have finally been able to get through to file a claim. But now, the issue seems to be when are the first checks going to arrive?

People say they have been told everything that their claims were under investigation or received noticed that they had been denied.

Joshua Gill was laid off from a Corbin factory and is pleading for help to help feed his four children, one of them being a newborn. He says the unemployment won't be enough but he says right now it is the only thing they have.

“It is just a scary situation having a family to take care of and then unemployment not coming in right now,” Gill said.

Gill is among thousands out of work and full of questions, often waiting for a phone call or an email.

“I would just like to figure out why so many people ain’t getting nothing," Gill said. "I understand they are busy.”

Governor Beshear says they hope to provide some answers soon.

“We absolutely have to do better dealing with an antiquated system, says people don’t qualify when they do,” Gov. Beshear said.

The problems early on were people not able to even file their claims. Now they’re wondering why their first payments haven’t been made yet.

Una McCarthy says her son was laid off and a check of his checking account revealed a puzzling problem.

“Then last week he got a deposit," McCarthy said. "Into his account for zero dollars. So, he wasn’t sure what that meant.”

Other people have said they’re getting messages saying their claims are under investigation. Gill said he would just like more communication from the state.

“It’s nothing even if it is a piece of paper in the mail," Gill said. "But they are letting us know nothing.”

"We have hired more people in that area than ever and are hiring more," the governor said. "We absolutely have to do better. We are working with an antiquated system that still wants to tell people that qualify they don't because while the law has changed, the software that created all of this and is supposed to streamline it, now doesn't work."

Beshear said he also has spoken with Senator Mitch McConnell about clearing up some federal issues regarding small business loans. Beshear also says there could be additional relief coming down the pike.