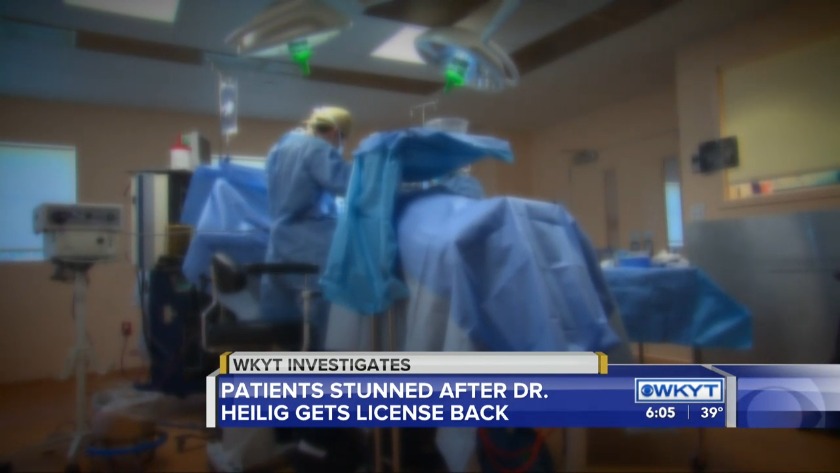 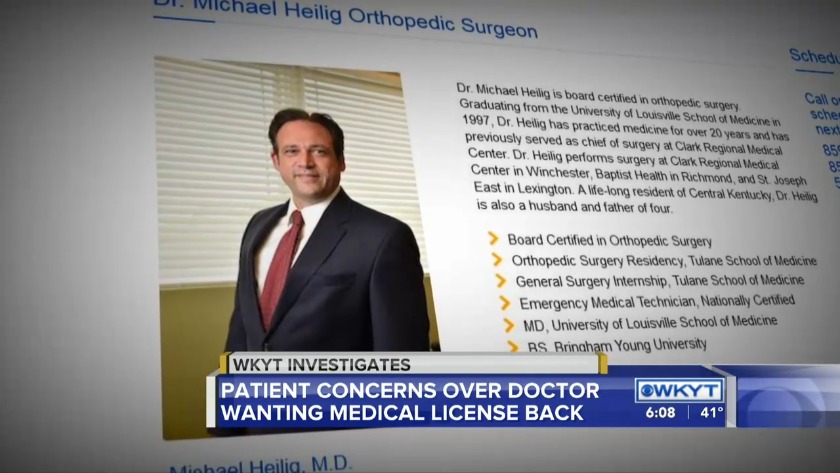 WATCH WKYT investigation into doctor suspended for being on drugs

LEXINGTON, Ky. (WKYT) - "I wake up and I have to pick my arm up to move it because it hurts so bad."

More patients, like Andye Johnson, are coming out of the woodwork following WKYT's investigation into Orthopedic Surgeon Dr. Michael Heilig. Andye Johnson said she had three shoulder surgeries with Dr. Heilig -- each one leaving her shoulder hurting even more than it had been before.

Heilig had a cocktail of drugs in his system during surgeries he was performing May 10. He was consequently suspended from Clark Regional Hospital and his Kentucky medical license was restricted for an unknown amount of time.

WKYT uncovered Heilig may be able to get his license to practice medicine back if he stays clean for 90 days. That was a stipulation in the agreed order with the Kentucky Board of Medical Licensure. The order said Heilig was impaired during operations. A nurse in the operating room told the medical licensure board Dr. Heilig was "talking weird," "stumbling with his eyes closed and mumbling" and "almost fell off a stool." A drug screen that day showed oxycodone and generic Xanax in his system, among other similar drugs. The only prescription he was able to show the drug screen lab was one for oxycodone from 2009.

WKYT invited a group of former Heilig patients to our studio who had reached out to WKYT Investigates following our first report. Each said they had surgery performed by Heilig. The counties represented in the group of six people were Nicholas, Rockcastle, Fayette and Breathitt counties. When Combs asked the group how many had heard about Dr. Heilig's restricted medical license, most raised their hand. Some had already received a letter in the mail from his practice saying he no longer was employed there.

Christina Curtis has had three knee surgeries with Dr. Heilig.

"I haven't had nothing but trouble since," Curtis said. "Pain Constantly, trouble walking. I trusted him. I thought he was doing the right thing. I don't know whether he was or not."

Rebecca Patrick is preparing for a complete knee replacement following a Heilig surgery.

"I am waiting for further testing and another surgery that has to be done by an orthopedic specialist because it has to be totally reconstructed. It's scary. It's very scary. I'm really scared," Patrick tearfully said.

Danny Davis from Richmond broke his right arm in two places in an accident. He said Dr. Heilig told him it would be an easy fix. Ten months after his surgery, he was shocked when his arm broke on its own.

"I was in an airport getting ready to board a plane and my arm was hurting. It had been hurting for a day or two prior for some odd reason. I started feeling movement in my arm and it had just rebroken and through no incident," Davis explained. "It just snapped, and the titanium plate broke as well."

A team of surgeons at the University of Kentucky eventually had to fix Davis' arm.

Vivian Johnson sat in the middle of the group holding onto her ankle, saying it hasn't been the same since her surgery.

"I can feel something pulling. It won't go sideways," Johnson said. She broke a bone in her foot but ended up having another surgery with Heilig when he said her tendons had torn. She's looking for another surgeon.

"Something's up," Andye Johnson said to the group. "Why would there be so many that are having issues? When the other people talk about it, I'm sitting here like, that's exactly what's going on with me."

It unnerves the group that Heilig could be back in the operating room sooner rather than never.

"He should never practice again. I think he's forfeited that right," Davis said.

Dr. Heilig is on the Kentucky Board of Medical Licensure agenda Nov. 15. His attorney is requesting a modification of the agreed order that was filed Aug. 3.

All of the people WKYT interviewed are working on or have already filed malpractice lawsuits.