Ocasio-Cortez criticizes McConnell after his supporters appear to grope cutout 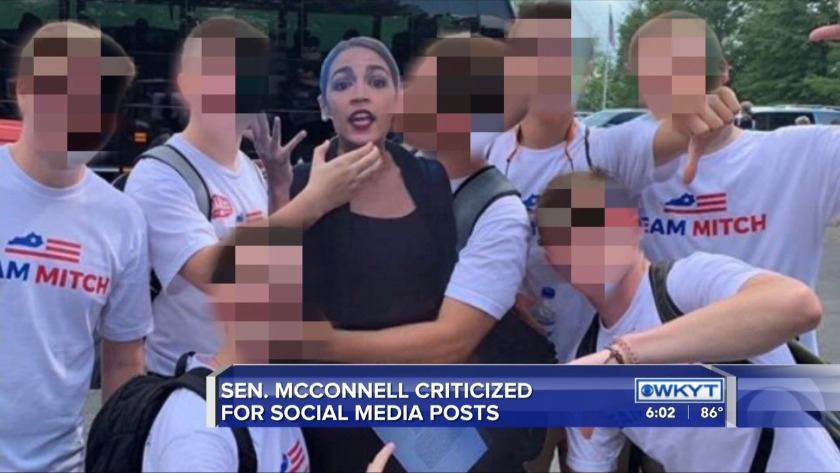 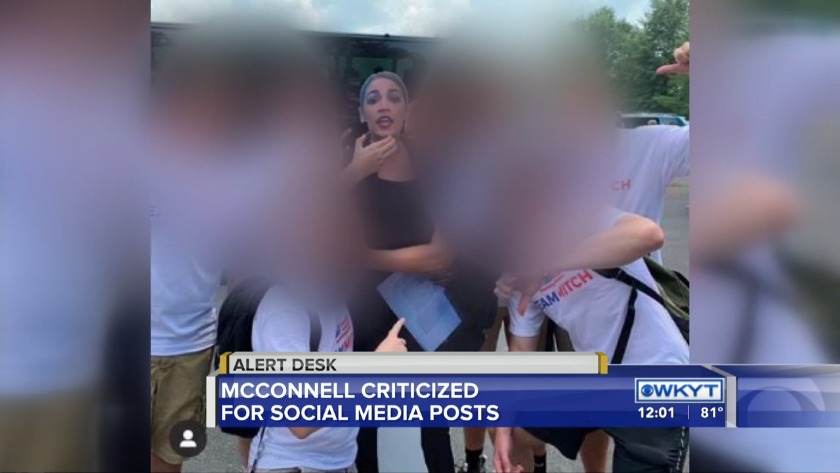 LEXINGTON, Ky. (WKYT) - U.S. Representative Alexandria Ocasio-Cortez is calling out Senator Mitch McConnell after a photo surfaced of some of his supporters at Kentucky's Fancy Farm Picnic.

The picture shows the group of young men wearing 'Team Mitch' shirts posing with a cutout of the progressive congresswoman from New York. One appears to be making a choking gesture toward Ocasio-Cortez's throat. Another appears to act like he's groping and kissing her.

The photo, originally posted on Instagram, had the caption, in part, "break me off a piece of that." The full caption was cut off, leaving out "Fancy Farm."

Ocasio-Cortez tweeted at the Senate Majority Leader Monday night saying quote, "Are you paying for young men to practice groping & choking members of Congress w/ your payroll, or is this just the standard culture of #TeamMitch? Thanks."

“Lexington Christian Academy officials are aware of a photo circulating on social media which includes LCA students attending a recent, non-school event. This matter has been addressed with the students and families involved," the school said in a statement.

McConnell campaign manager Kevin Golden responded to Ocasio-Cortez's criticism, saying the "far-left and the media" look to attack young people who get into Republican politics.

"These young men are not campaign staff, they're high schoolers and it's incredible that the national media has sought to once again paint a target on their backs rather than report real, and significant news in our country," Golden said. "Team Mitch in no way condones any aggressive, suggestive, or demeaning act toward life sized cardboard cut outs of any gender in a manner similar to what we saw from President Obama's speechwriting staff several years ago."

This comes after the Kentucky Senator's campaign tweeted a photo, also at Fancy Farm, of several gravestones of his political foes. They include retired Marine fighter pilot Amy McGrath. She is the main Democratic opponent in the 2020 Senate race for Kentucky. Former 2016 Senate challenger Kentucky Secretary of State Alison Lundergan Grimes was also included on a grave marker as was Judge Neil Gorsuch, 'socialism' and 'green new deal.'

McConnell's team posted the photo as details were coming to light about the mass shooting in El Paso, Texas that is being investigated as a racially-motivated hate crime.

McGrath tweeted at McConnell, "Hours after the El Paso shooting, Mitch McConnell proudly tweeted this photo. I find it so troubling that our politics have become so nasty and personal that the Senate Majority Leader thinks it's appropriate to use imagery of the death of a political opponent (me) as messaging."

Hey @senatemajldr - these young men look like they work for you.

Just wanted to clarify: are you paying for young men to practice groping & choking members of Congress w/ your payroll, or is this just the standard culture of #TeamMitch?

As cases surge, 3 in 4 US hospitals already facing COVID-19

Stocks rise sharply on hopes of progress in battling coronavirus

As cases surge, 3 in 4 US hospitals already facing COVID-19

Stocks rise sharply on hopes of progress in battling coronavirus