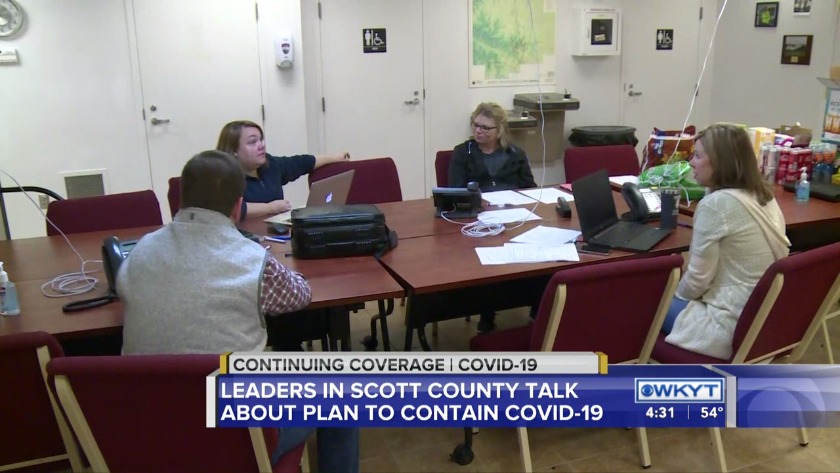 SCOTT CO., Ky. (WKYT) - Over the weekend, Scott County officials learned they had their first confirmed case of the novel coronavirus.

That prompted an immediate response.

From 8 a.m. to 4 p.m. Monday through Friday, four people will staff a hotline to answer calls and direct delivery services for residents who can't come out.

"People who are in need materials, either groceries or prescriptions can get those things without having to have face to face contact with the vendors," said Mike Hennigan, Scott County EMA Director. People who are either choosing to self-isolate or through medical advice are being kept in their houses now have an option in order to be able to get their food and necessities."

The response was a collaborative effort between a number of agencies.

Scott County Judge-Executive Joe Covington says it was vital this plan was in place before the county had cases.

"We started working on this last week together," Covington said. "We met. I called everyone together and we met and we just wanted to have a resource prepared. We just didn't want them to feel like there was no avenue for them to get critical essential resources: food, medical, prescriptions and those types of things."

Officials tell us there are three main groups they're hoping to help through this service: those who are over 60, those who are being asked to quarantine by a medical professional, and those who are choosing to self-quarantine.

"We're trying to work with them as best as we can even if they're not going to fit what we're going to provide for the food and prescriptions we can at least get them with the resources that will allow them to move forward in their process," Hennigan said.

EMA Director Mike Hennigan says have a plan in place prior to Sunday was key to a seamless implementation.

"It actually wasn't as difficult as you might think," Hennigan said. "We went through Ebola and Sars so I had a lot of the plans prewritten, we were just changing the name of the virus."

"We've gotten 20 calls up to now," Covington said. "We actually opened on Friday of last week and I'm thankful that we've not had just a crazy amount of calls because that tells me and that confirms that Scott County and Georgetown are taking care of each other."

Officials want to remind everyone the best way to stay healthy is to stay home, social distance, and use good hygiene practices.