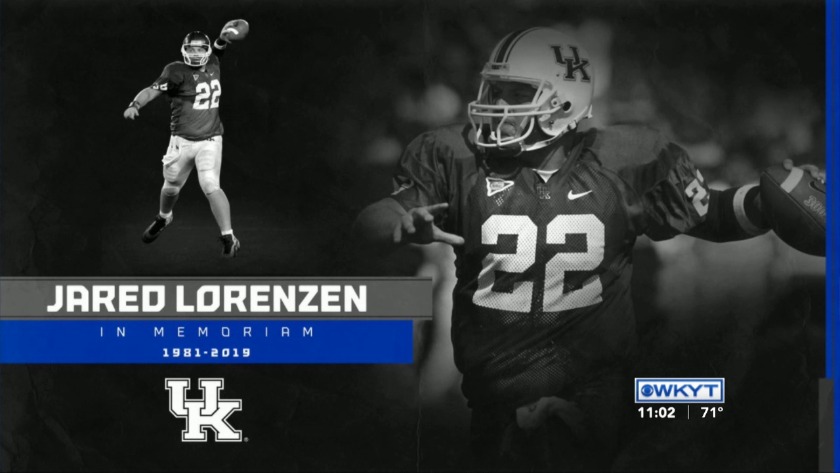 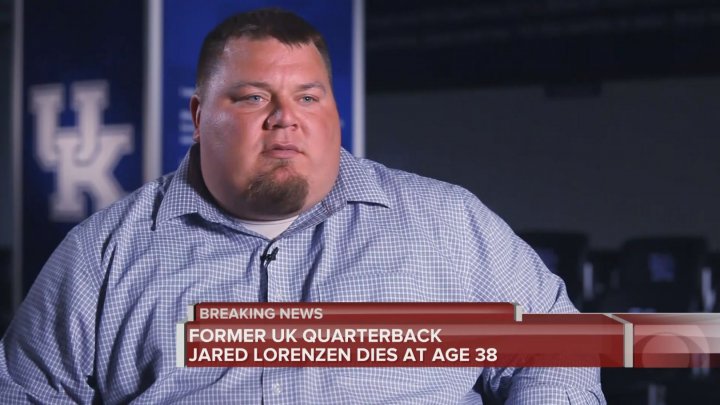 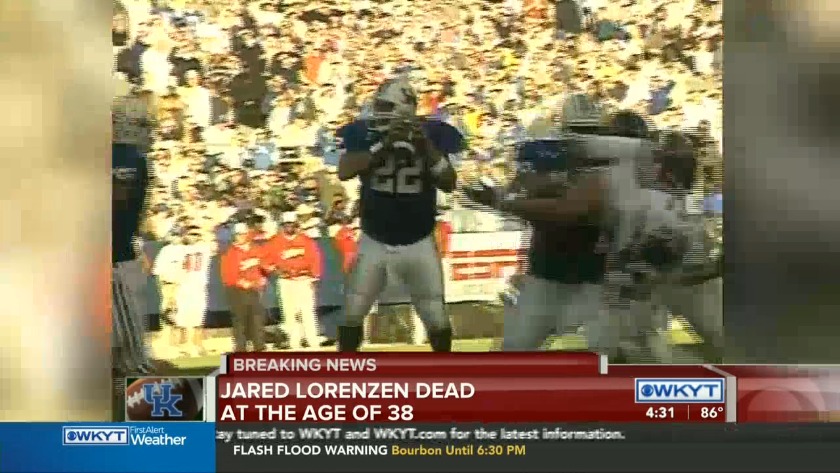 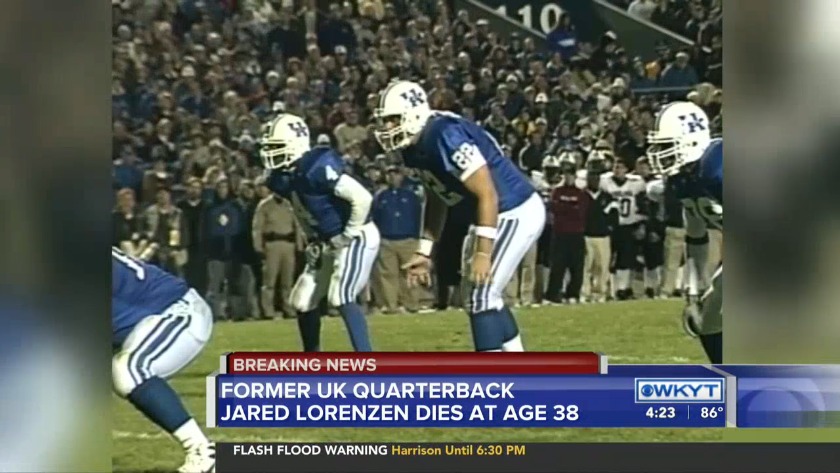 Jared Lorenzen has died at the age of 38 (Photo: Regina Rickert)

WKYT's Dave Baker confirmed Lorenzen's passing through a family member. The family thanked the public for their support and asked for privacy.

Born in Covington, Lorenzen is one of the most recognizable Kentucky Wildcats football players of all time. After being a standout athlete at Highlands High School in Fort Thomas, Lorenzen would commit to Kentucky to play at Kentucky starting with the 2000 season.

“This is a big loss for our school and community,” said Matt Bertasso, Highlands High School Principal. “Jared represented Highlands with skill, grace and professionalism from his time at here and into college and professional career. He’ll always be a Bluebird.”

Known as the "Hefty Lefty," his size made him a fan favorite as he started all four years while with the team. Kentucky would have its most success with Lorenzen in 2002 when the team achieved a 7-5 record. The Wildcats were not bowl eligible that season because of NCAA sanctions.

“We are deeply saddened to learn of Jared Lorenzen’s passing,” said Mitch Barnhart, UK Director of Athletics. “Jared was a uniquely gifted player who endeared himself to the Big Blue Nation with his passion for the game and his incredible talent. More importantly, he was a true Wildcat and a man whose love for the University of Kentucky was plain to see well after his playing days were over. That love was surpassed only by the love he had for his two children. We offer our support and condolences to them, as well as all of Jared’s family and friends.”

The 2002 season would also bring one of the more infamous moments in Kentucky history. During a game against LSU, Lorenzen prematurely gave head coach Guy Morriss a Gatorade bath before the Tigers won the game on a hail mary touchdown pass. The game is commonly known as the "Bluegrass Miracle."

"We are heartbroken for Jared’s family and friends," Kentucky head coach Mark Stoops said. "Since I’ve been here, it has been obvious that he was one of the most popular players in school history. He was a proud member of the Kentucky football family and he will be greatly missed by the Big Blue Nation."

Lorenzen would join the New York Giants as an undrafted free agent. He was on the team that defeated the previously-unbeaten New England Patriots in Super Bowl XLII.

“Jared was a great teammate and friend," Giants quarterback Eli Manning said. "We competed against each other in college and came to the Giants together. My thoughts and prayers go out to his family. I will always remember his competitive spirit and his good nature. Jared has left us all way too soon.”

"[Lorenzen] admitted to me, I asked him in that seven-win season and they won their first four, I said 'What's the difference between the Jared Lorenzen right now and the guy last year?' He said 'I know the plays.' I said 'Excuse me?' He said 'I learned the playbook.' I said 'Are you trying to say?' 'Yeah,' he goes 'Last year I didn't know the plays.' He was so undisciplined, and remember he knocked heads with the OC, and so what he did the year prior, thousands of yards, he did it basically winging it. And yet, when it was time to buckle down, he knew how to get the job done."

After spending some time in the NFL, Lorenzen's weight would become the source of many health problems. He weighed in at nearly 600 pounds before starting a documentary series profiling his weight loss journey.

"Jared was winning this battle. He was making progress. To lose 100 pounds and it still got him, that's really what hurts," said Mills.

In the documentary, Lorenzen was very candid about his struggles with his weight. He said in the first episode he would "die in five years" if he didn't take steps to lose weight.

Lorenzen is survived by his two children.

In a text to my colleague @RussDinallo, who produced our E:60 story on Jared Lorenzen, Lorenzen's mother Janet confirmed that Jared died today. He was only 38. Janet said, "I lost my sweet boy today after a long hard fight."

We lost a great one too soon today. Our hearts are with the Lorenzen family.

Horrible news. The Pillsbury Throwboy was an icon. Sincerely sad to hear about the loss of the Round Mound of touchdowns. One of the greatest college QBs of all time. RIP Jared Lorenzen https://t.co/YRT1diXclB

Jared Lorenzen was Kentucky’s QB when I attended Indiana. Fueled by our rivalry, I and many Hoosiers made fun of his weight. Today, Jared died because of weight struggles which drastically worsened with age. He was 38. pic.twitter.com/Nopra7DNJc

Sad day in https://t.co/DNYcFT5isw Jared Lorenzen. Prayers and condolences to his family and friends and to everyone affected by Jim Beam fire. ❤️��❤️��

Rest in Peace to a college legend.

Jared Lorenzen was a baller. pic.twitter.com/iHpnv2B9ER

Here is the call of Jared Lorenzen’s first touchdown pass as a Kentucky Wildcat with ⁦@tomleachKY⁩ on the ⁦@UKSportsNetwork⁩ pic.twitter.com/YMSng3odHs

Flashback to Jared Lorenzen at Highlands...

My deepest condolences to the family of @JaredLorenzen22 Jared and our kids went to the same HS, Highlands. He was a bigger than life hero for those kids, but he always had time for all of them. It is the size of his heart that I will remember most, a hefty lefty indeed.

Sometimes thing are not right. Losing @jaredLorenzen this early is very sad. Fantastic athlete and a very kind person. He battled to the end. My best to his family. Very lucky to coach him for a year.

Jared loved Kentucky and we loved him right back.