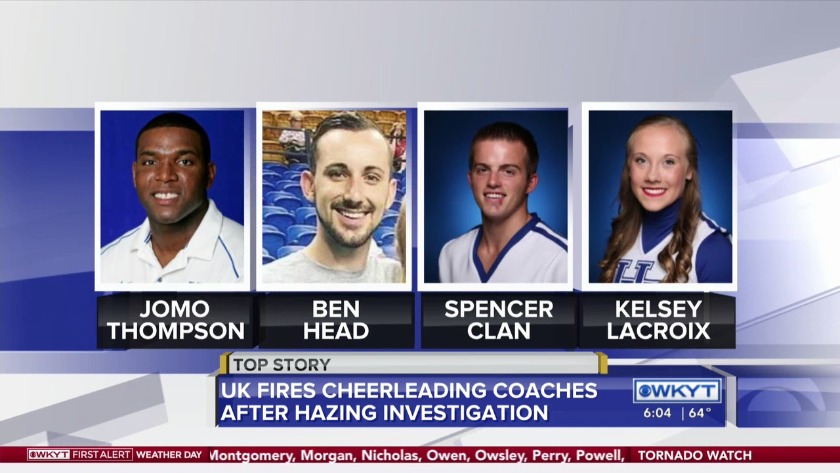 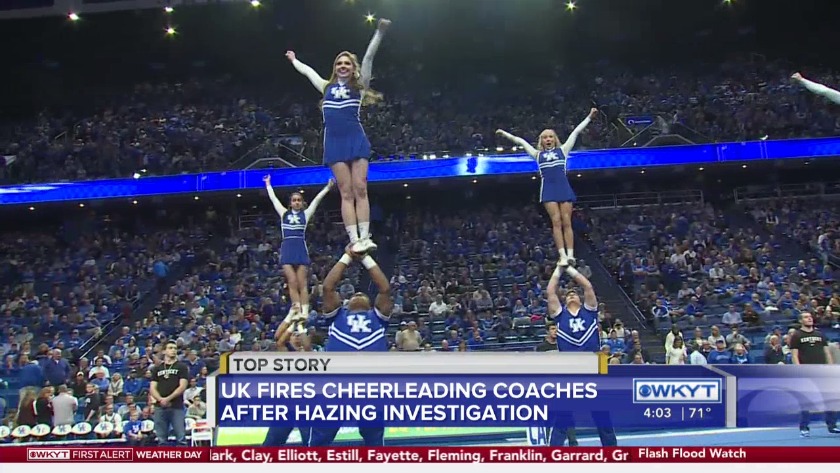 LEXINGTON, Ky. (WKYT) — The University of Kentucky has fired all four of its cheerleading coaches.

UK officials say Head Coach Jomo Thompson, Assistant Coaches Ben Head, Spencer Clan and Kelsey LaCroix were all dismissed in the wake of a three-month investigation into hazing, alcohol use and public nudity.

UK officials held a press conference Monday morning to discuss the findings of the investigation:

According to a UK press release, the investigation included interviews with more than 60 students, coaches and administrators in the cheerleading program.

UK Provost David W. Blackwell said the review found:
• Coaches knew or reasonably should have known of inappropriate conduct by cheerleaders and failed to take sufficient steps to address the conduct;
• During a team retreat at Lake Cumberland, some cheerleaders performed gymnastics routines that including hurling their teammates from a dock into the water while either topless or bottomless. The routines, known as “basket tosses,” were done at the direction of other members of the squad and within the view of at least some of the coaches;
• Coaches allowed cheerleading alumni to bring boats and alcohol to the retreat, where some cheerleaders were partially naked and/or drinking while riding on boats;
• Coaches did not confiscate alcohol brought to the retreat by some squad members or intervene to stop students from consuming alcohol. Several squad members became so intoxicated they required medical treatment; and
• During a cheerleading camp in Tennessee, some cheerleaders were directed by other members of the squad to perform lewd chants and wear outfits that did not include underwear.

The investigation found no evidence of sexual assault or sexual misconduct during these trips. But they don’t believe this was limited to one year.

"It’s unclear how long inappropriate behavior has been part of the off campus trips," Blackwell said. "However, we believe these activities were not confined to the past year, and may have been tolerated for many years. While much is still unclear, given the conflicting accounts from dozens of participants interviewed, one thing is crystal clear. The blue and white squads have been operating under lax oversight for many years."

That investigation said they also found potential financial conflicts of interest for two members of the coaching staff who ran gymnastics businesses and employed members of the cheerleading squad. As well as the advisor who hired students and coaches.

UK Athletics will immediately begin the national search for a new head coach, who will be part of the selection of assistant coaches and the 2020-21 team members this summer.